The title is a lie and plain clickbait, but let's have a laugh while we wait :). 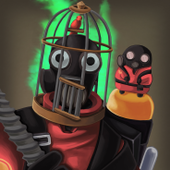 The next update video came faster than expected, wow.