This mornings sunrise over the mist and one of the last photos of my gorgeous dog, that I had to put down due to nasal cancer a few hours ago. Ten good years. (Reduced to get below the limit)

My doggo looks cute but it never listens... 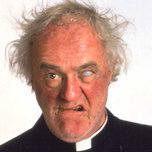